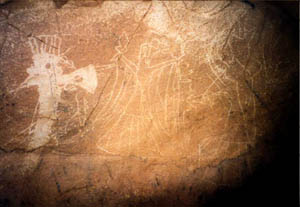 Human beings have been exploring caves since the dawn of time. In human prehistory, they provided shelter, as well as a canvas on which prehistoric man could paint his desires for a good hunt. These early hunters apparently believed depicting the outcome they desired would cause it to happen. A wonderful display of paleolithic cave paintings was discovered on Christmas Day, 1995, at Vallon-Pont d'Arc in Ardeche, France. Here in Tennessee you are more likely to find petroglyphs or mud glyphs than cave paintings. Usually these were made by the Archaic, Woodland or Mississipian peoples.

Among Stone Age cultures, caves had great ritual significance. The Maya of Central America believed that caves were the gateway to the Underworld and, therefore, any rituals performed there would quickly gain the notice of ancestral spirits. So strong was this belief that some temples were carved to resemble caves, or in some cases, -->built over caves to encourage the spirits to interact with living priests. The Native Americans of the Northern Hemisphere also believed that caves were sacred places. Archaic and Woodland Indians sent their bravest warriors into the dark recesses of Mammoth Cave to mine epsomite and gypsum crystals. Those who returned were honored and the crystals they brought home with them became sacred heirlooms or sought-after trade items of the tribe.

In more modern times, caves have been used for a variety of purposes: refrigerated food storage during pioneer times, saltpeter mining and weapons storage during the 1800s, speak-easies and hideouts for moonshine stills during Prohibition, and dance halls during World War II. Cumberland Caverns in Tennessee still contains a large dining hall which is regularly used for parties, receptions and Scout camp-outs.

Currently, extreme outdoor sports have gained popularity thanks to the "Mountain Dew" mentality of "been there, done that." For this reason, many of those who explore caves on a regular basis (cavers) feel they must double their efforts to educate the public to the fragile nature of the cave environment.

Because they are mysterious and can be dangerous to the unwary or the unprepared explorer, caves may seem dark, menacing or even evil to some people. This image has been perpetuated by cases where caves have indeed been used as hermitages, hideouts for criminals or fugitives, or as regular meeting places for covens or cults. There are a substantial number of caves in TAG which show evidence of such usage and a few which are documented in public or historical records. However, the vast majority of caves are home only to bats and crickets.

Nevertheless, wild stories and local legends persist. Probably the most famous of these is the story of the Bell Witch, in particular the supposed manifestation of an evil presence in Bell Witch Cave.

Located on a bluff overlooking Red River on the old Bell family farm, the Bell Witch Cave is reputed througout Robertson County to be the current lair of Ol' Kate, the vindictive spirit who tormented the John Bell family during the early 1800's. Following is a quote, which concludes with some good references for further reading, on the Bell Witch Cave by Aaron I. Hilbun, from the alt.folklore.ghost-stories newsgroup:

"Sorry if this has been a little rambling, but these oral tales are sometimes hard to commit to writing. There is an interesting note, there is a cave on the old Bell farm (which I have personally visited) which supposedly is the seat of all the supernatural activity. When some of the Bell children played in this cave, something weird would always happen to them. It is easy to dismiss this as a sort of post script attatched to the story by a later generation, until I read that the native Americans of the area regarded the cave as spiritual, long before the Bell family came to Tennessee. When all these factors are taken into consideration, it is difficult indeed to say just what sort of manifestation for sure the Bell Witch was. If you'd like to read more about this, two good books are: The Bell Witch of Robertson County, Tennessee, by Charles Bailey Bell (John Bell's great grandson I believe) and The Bell Witch by Charles Edwin Price [1994]."

Caving in the After-Life 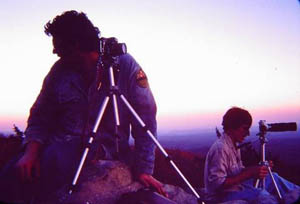 Many TAG cavers have heard rumors that a long-time caver was cremated and buried in a cave somewhere in TAG. Here is the true story behind that rumor.

A name familiar to many original TAG cavers is Art Bosnak. Art was a giant of a man (well over 7 feet tall), certainly the largest caver in TAG, with a passion for cave research and photography. When he walked through a house, the walls shook. When he sat down, furniture creaked and strained. Yet he drove around in a teeny tiny MGB convertible with the front seat removed, and his greatest joy in life was exploring caves. In particular, he took great joy in seeing the many varieties of formations and in exploring pristine passages.

In the late 70s and early 80s, Art was one of the prime instigators of the Spectre Grotto, which eventually moved from Sparta to Cookeville, Tennessee. His dedication and enthusiasm for exploration, photography, surveying and biological research made him widely known and liked throughout TAG. To this day, many widely recognized cave photos and many cave maps or cave features bear his name, including the largest walking borehole in Tennessee, Bosnak Borehole in Blue Springs Cave, which was named to honor him posthumously.

After some routine dental work, Art became quite ill. Two of Art's friends, Ross Cardwell and Marvin Bullock, took him to the emergency room of the hospital, where it was discovered that a bacterial infection had attacked Art's heart valves. Following a three-month stay in the hospital in Nashville, Art went to visit his parents at their home in Ohio. Three days later, on April 16, 1985, Art died of heart failure at the age of 38. TAG cavers mourned his passing in true TAG fashion, with parties, caving trips and bonfires.

Art had requested that his body be cremated. Following his instructions, his friends placed his ashes in a sealed length of PVC pipe and buried it at the bottom of Ellison's Cave, where Art could enjoy the beautiful formations he had loved so dearly for all eternity.

According to some sources, Art's closest friends have periodicaly removed Art's ashes from their resting place and reinstated them in another cave for a time. Although this may seem like a macabre tradition, it is their way of reminding themselves of their friend. So, if you hear someone say they are going to take Art caving, you now know who and what they are talking about.

A Spirit in the Mist

(A poem about a man who, in death, becomes what he most loved in life)

There exists in the earth, in a cavern deep, the spirit of a very large man.
Buried there in the sand, among the formations tall, and near the bottom of a Mountainous Hall.
Bound in plastic, his universe is small, nowhere to go,
no one to show the wonders of his world of darkness.
Darkness so black, no match to light, no candle to burn bright.
He is all alone, except for an occasional bat or a caver in a hard hat.
Hard-core to find his home, hidden by those who know and visit seldom, the shadow of his dome.
Large in life, gentle in mind and thought, formations were what he sought.
Now in a place he once could only dream of, to stay for all eternity.
Surrounded by what he loved, gone from this world of strife,
aware or not aware of what goes on in this life.
Carried by friends, (three), into the mountain in PVC,
many pits to drop before the bearers of this pall
could find his final place of rest at the bottom of the falls.
Who knows for sure where now he lies, if his ashes have shifted and moved
and fallen through some groove to become one with the cave
and he lives once again as a formation never known to this world.
Now to be admired by those who see the underground beauty of the Spirit in the Mist
and in seeing this can know that God surely does exist.

The Holey-est State in the U.S.

Based on data turned in to the Tennessee Cave Survey (TCS), Tennessee currently has more discovered caves than any other state at over 8,400. Officers of the TCS guess that the state may harbor as many as 15,000 caves. However, because of differences in how state cave surveys define caves (see below), this record is a hard one to pin down accurately.

Most states define caves as natural features that can be entered by human beings and which are totally dark at some point along their lengths. However, many state cave surveys also have additional qualifications, usually pertaining to length or size, for what constitutes a cave.

To qualify as a cave in Tennessee, a cave-like feature must also fulfill the following requirements. It must either be longer than 50 feet (total horizontal distance or THD), have a total vertical distance of over 40 feet (TVD), or contain a pit deeper than 30 feet. Missouri contains a little over 5500 known caves (as of the May 1996 MSS meeting), but in Missouri any cave- like feature longer than 30 feet can be considered a cave. In Alabama, a cave-like feature is only a cave if it has 50 feet TSL (total survey length). For example, 20 feet of horizontal passage followed by a 30-foot pit would qualify, as would a 50-foot horizontal cave or a 50-foot pit. Any cave which contains "obligatory cavernicolous fauna" (troglobitic species) qualifies automatically under the Alabama Cave Survey's definition.

One reason cave qualifications are not consistant from state to state is because different types of karst features are prevalent in different areas. Each cave survey has developed the set of qualifications most meaningful in light of its state's geology and terrain.

The Top Ten Deepest and Longest Caves in the U.S.

Deepest in the U.S.:

Longest in the U.S:

Thanks to Bob Gulden, here is the complete list of the deepest and the longest caves in the World. Last Update: January 21, 2003.

Go back to the TOP of this trail.

Go back to the Entrance.

We welcome your comments or bug reports
via email to your friendly, neighborhood speleoweb hostess,
April Hannah, NSS #35012.

This page, http://orgs.tntech.edu/grotto/facts.html, validates as